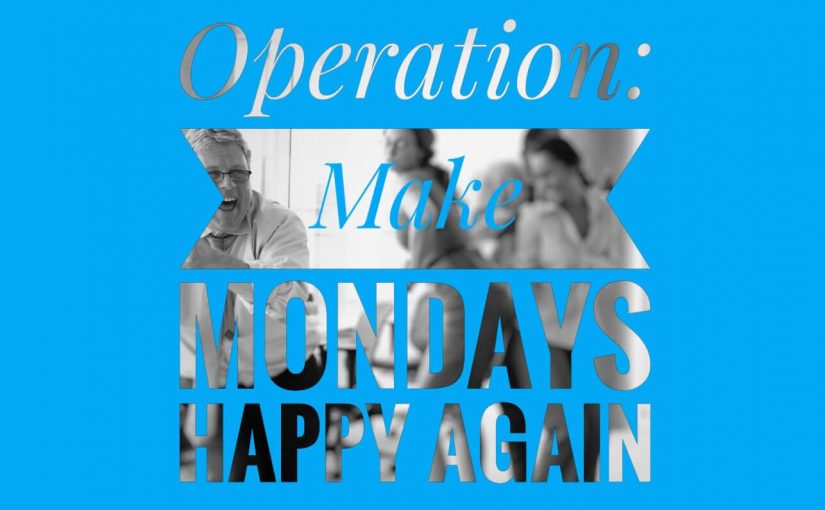 Mondays. For most people, just that word is enough to cause a sigh and a long list of negative associations. It’s like sledding: for most of the week you climb that hill with your sled, trudging up as far as you can, until 5:00pm on Friday rolls around and you can actually start sledding down the hill. You have a ton of fun through Saturday, relax on Sunday, and then Monday begins the climb back up the hill.

Mondays are even worse for entrepreneurs I think. People wake up on Monday and are often in a bad mood and forcing themselves to be productive. In consequence, they come up with all kinds of “urgent situations” and this turns into a sort of “kick the dog” scenario where the president kicks the COO who kicks the assistant who kicks the department lead and somewhere down the line, the entrepreneur gets kicked because he’s supposed to offer a service somewhere in the mix, and then down the line it goes until the kid kicks the dog.

So what happens to the entrepreneur, is that (in my case) I have 5-6 clients that I could be working with at the same time. So I end up getting kicked 5-6 times on Monday.

My phone and email blows up with all of these “urgent” requests and everyone wants to know what my plans are to resolve their issue so that they can report back up the chain of command.

Monday is the day that everyone holds a lighter in one hand, and a fire extinguisher in the other. They start fires for those below them, and try and put out the ones that their superiors light above them. The entrepreneur ends up trying to put out 5-6 fires and in my experience, wastes so much of their peace and energy and enjoyment to try and please a group of people who are too stressed to prioritize or negotiate respectful timelines and expectations.

I’ve been a full-time entrepreneur now for 2 years. It took me more than a year and half before I realized that it was possible to actually enjoy the start of your week. Believe it or not, the entrepreneur can have better Mondays than those who are employed by others…it just takes a few uncomfortable weeks to set a premise.

I decided to try something out: take Monday off. Tell my clients that I will be out of the office on Mondays, and will return on Tuesday. To take it a step further, I decided to plan to make Monday my favorite day, by making it a day for me. I record music, write a blog, go shopping, work out and any and all hobbies that might sound good at the time. I also spend a portion of the day setting things up for the week.

At first, my clients were confused and some of them made such a fuss over the high priority nature of the task, that my first Monday was only a half day off. But after a couple of weeks, my clients started to get used to it. They stopped reaching out, because I would just politely reply, “I’m sorry, I’m not in the office on Mondays, but I will review this task tomorrow”.

The result was incredible. Strangely enough, issues that were “ASAP!” and high priority and high stress environments — those same issues weren’t a big deal on Tuesday morning. When they would reiterate Monday’s request on Tuesday, it was delivered with a realistic suggested timeline, and some tasks ended up being forgotten altogether.

High priority doesn’t always mean highly important. Being busy doesn’t always mean being productive. In a scramble to feel as if you are being productive, you often forget to see if that task is even necessary, or worse, if that same task could be done in a different way that might be more efficient or provide better results. Nothing makes you spin your wheels unnecessarily, more than a stressful environment and high tension demands.

Inventory of my time made me realize that Mondays were responsible for 90% of the hours that were busy but not really making an impact towards anything.

What happened when I turned Monday into me-time, was that I was able to better prepare for things. I would clean my house, meal prep, play music, go get a massage, strategize the week, etc. and by the time Tuesday arrived, I was in a good mood and ready to take on my tasks with vigor.

As far as productivity is concerned, I accomplish more during the weeks where I take Monday off. It’s that simple.

I used to go to bed really late on Sunday night, because I dreaded Monday morning and I would want to squeeze every bit of freedom out of my weekend before I would have to wake up to the chaos. I used to feel like someone kicked me in the gut by the time Monday was over, and it would set the tone and stress levels for me for the entire week. Now, I relax and go to bed early. I wake up in a good mood, and look forward to finally getting to invest in myself.

Work a few hours on Saturday or Sunday if you really need to. Work longer days from Tuesday-Friday. Get creative. Just do your sanity a favor, and avoid getting in line with the firing squad that is Monday morning.

Most people don’t stop to think about what’s effective. They are more concerned with what appears diligent. It is because of this, that you might get some pushback, especially in the initial stages. But the benefits far outweigh the discomfort and if you are an entrepreneur, I would suggest that you are one of the few people who are even capable of defying this poisonous habit of turning one day of your week into the day you hate the most. And if us entrepreneurs pick up the torch, who knows? Maybe we’ll get others to follow.